Do you believe that the bronze David of Donatello should be considered a work of Gay art? What does the possible homosexual eroticism in this statue do for the statue’s meaning? 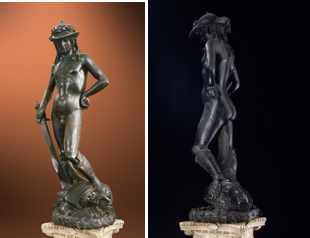 It is unclear if there are absolute subcategories of categories of art. Through time, it proves itself to be a philosophical fallacy. Everything isn’t created as something to be something else – it simply just is. Standing as itself, fully prepared to be observed.

By way of art, that being cherished timeless art, it simply is supposed to make you feel. This particular piece of art is a sculpture. Is there an archive somewhere of purely gay sculptures, or is there just an archive of sculptures? (I Googled “gay sculptures,” and not much came up) Herein lies the crux of the issue. It is the idea that if it is not defined, it does not exist. Simply that is not the truth.

This sculpture exists, with its magnitude of femboy energy, rampantly running through a masculus empowerment of time in a place that adored brute force and war. Now that’s pretty badass.

Idyllically in the academic world, cultivating phrases to define and categorize is encouraged. The belief is an improper approach to art, generally speaking. Additionally, the fact that the academic world is the catalyst for constant name-calling, or rather “defining” concepts and people and particular pieces of art, is an injustice to the overall concept of art itself.

Art is supposed to make you feel. If by looking at this painting you feel homoeroticized, consider exploring that avenue of yourself. Some people look at that sculpture and find offense in his nudity; I’d encourage those people to look inward and digest that discomfort and sit with it. Religious zealots may glance at this sculpture and think, “The Bible’s David is womanly! Blasphemy!” I’d ask those people what a man looks like. Must others squeeze themselves into that box purely to be perceived comfortably by that community? Consider if a queer David would or would not be accepted, regardless. Those in academia may look at that sculpture and find the urge to name it, define it, and put it in a box, removing its connection with people outside that box.

Academia often encourages us to take sides. There are no sides. When I look at this sculpture, I see talent, progression, edge, a rewriting of masculinity, and queer representation.

The article touches on the clues the creator leaves in the details of his work. Such as the decorative hat that alludes to a queer culture of courtship. The man’s body is hardly that of a man, but a boy with witty and clever potential to tear down an overbearing hierarchy of patriarchal means. I was taken aback by the theme of love, the cupid wing sensually brushing his thigh, and how love can be almost as impactful as a war vessel used to take down an enemy. When I look at these sculptures, I also see a distaste for masculine efforts over feminine ones, and I look inward to discover that it excites me.

Queer art is edgy and filled with narrative if you’re brave enough to see into it.

Madison is a writer and performance artist passionate about the expression of truth. She loves movies, teamwork and new perspectives. As a Floridian, she enjoys discovering different music and art forms.  Madison is a proud crystal faerie.